An alternative approach to the issue of Critical Raw Materials is to identify alternative substances that can work as a substitute, effectively replacing them and thus reducing the use of them altogether or planning new solution or processes.

The substitution of resource critical, toxic and poor performing materials is important, particularly in the fields of alternative vehicles, energy, machinery, and information and communications technology (ICT). Research projects include topics on energy storage, magnetic materials, hard materials, lightweight design, and materials and systems modelling. Substitution has been recognised as an essential element of the integrated EU strategy to secure raw materials supply (Pavel, et al. 2016). It could contribute to reducing the EU0s dependency on imports of raw materials, by improving domestic supply conditions, diversifying supply sourcing, and improving resource efficiency, including recycling.

As societies have developed and humankind began to master the use and refinement of materials from the Earth, substitution of one type of material for another has marked the evolution of human society. From the bronze age through to the current world of plastics, as technologies for extraction and refinement have advanced, one type of material has replaced another. In modern times, with the ever-increasing burden on the planet for energy use and material consumption, the need to find substitutions is driving research into alternative technologies for energy and material use.

Substitution becomes very powerful where a potentially scarce and critical raw material could be substituted by an abundant one (e.g. indium by zinc), but it has little benefit if the substitute is critical itself (e.g. platinum by palladium or indium by germanium), or might become critical because of the substitution. Substitution can also aim beyond the material level. Instead of substituting one substance by another it may be more beneficial to analyze the product system itself.

There are many components of these ‘green’ technologies that may be difficult to come by and in most cases at least one component of a green technology can be classified as a critical raw material.

In addition, modern conveniences and material use often require substantial use of petroleum-based products which puts a further strain on the exploration, extraction and the side-effects of waste production. The possibility of developing green technologies to generate energy from renewable sources (sun, wind and water) forms the basis for a low-carbon society and it is one of the most important challenges of our modern society.

Numerous wind turbines, solar power stations and other facilities will need to be constructed if a significant proportion of global electricity is to be produced sustainably. Building these facilities will require vast amounts of metals and other raw materials, which will then be sequestered for several decades and cannot immediately be recycled. Easily mined ore deposits are quickly declining and although new resources will be found in the deep subsurface or in remote locations, mining these deposits will consume large amounts of energy. Humankind faces a vicious circle: a shift to renewable energy will replace one non-renewable resource (fossil fuel) with another (metals and minerals).

The growing demand for rare metals, including selenium and neodymium in photovoltaic panels and wind turbines, risks derailing the shift to renewable energy. However, wind turbines and photovoltaic panels also require enormous amounts of common metals such as iron, copper and aluminium, as well as sand and industrial minerals to make concrete and glass, and hydrocarbon derivatives to create resins and plastics. 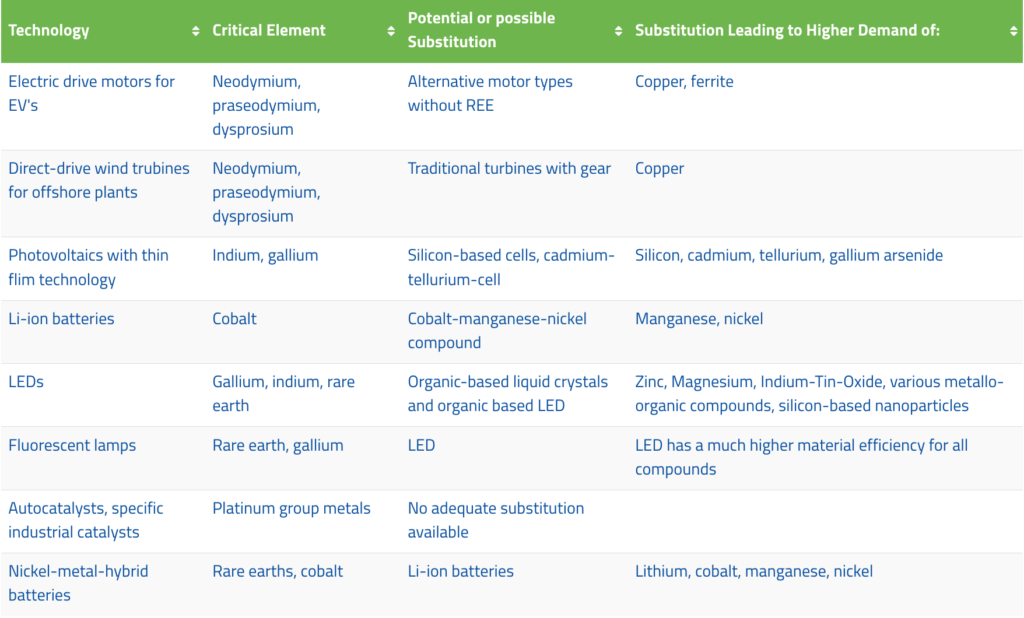 New emerging technologies based on alternative/innovative materials (organic, inorganic, hybrid) represent possible solutions for the critical raw material concerns in Europe and around the world. 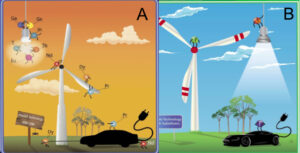 For example, the latest generations of wind turbines contain large amounts of rare earths elements (REE), but at the moment it is possible to build less efficient wind turbines without REE, or solar panels free of indium and gallium.

However, the environmental impact of substitution has also to be carefully considered. For example, wind turbines without REE require significantly more copper. Copper is not a critical material, but its production may cause significant water and air emissions because many mines and refineries around the world operate using equipment with insufficiently high environmental standards. Consequently, sustainable substitution strategies should always also include the sustainable production of the substitute.

An assessment of the state of the art of substitution revealed that a complete and direct (one-by-one) replacement of all CRM by other more readily available or less critical materials in phosphors and Light Emitting Diodes (LEDs) as well as in permanent magnets is still not possible at large scale despite many years of research. A promising approach which, in the short-term, would allow for full substitution of these CRM at element level, is also missing. High-functionality features prevent the direct substitution of CRM in high-performing compounds.

The lighting and wind power sectors as well as the battery electric vehicle sector are well prepared to respond to a potential CRM supply shortage thanks to progress made on improving the material efficiency and availability of CRM-free technologies. However, unlike the wind and lighting sectors, the emerging hybrid electric vehicle applications will remain largely reliant on critical raw materials, particularly on rare earth elements (REEs).

The summary of the figure above is as follows:

In the technology of Lighting:

The transition from fluorescence technology to LEDs has resulted in a decrease demand for terbium, europium, yttrium and germanium (up to 20 times less than in fluorescent technology). However, transition to LED lighting is bringing new challenges to material research since it will likely increase demand for gallium and indium that need substitutes too.

With the exception of indium, OLED technologies do not need CRM. OLED represents the next-generation technology that would eliminate the need for critical raw materials in lighting and display applications. In OLED, the CRMs are completely substituted by organic compounds, with exception of indium in indium-tin oxide (ITO), which might be substituted at some point as research activity is already ongoing in this field

With regard to Wind Energy:

Although there is a push toward replacing fossil fuel combustion engines with EVs, this poses some problems with regard to CRMs.

These examples illustrate something worth considering: as we work towards substitutions of materials, the new technologies may place a burden on another re source sector.

The technological trends in the lighting sector and the CRM involved.

Low-carbon alternatives can place a burden on critical raw materials. The Table below shows the materials needed for the low-carbon substitution currently on the market.

A need to develop technologies that can substitute for these critical raw materials is necessary.The Table below shows the key characteristics of some of the CRMs used in these technologies and the advancement of possible substitutions. 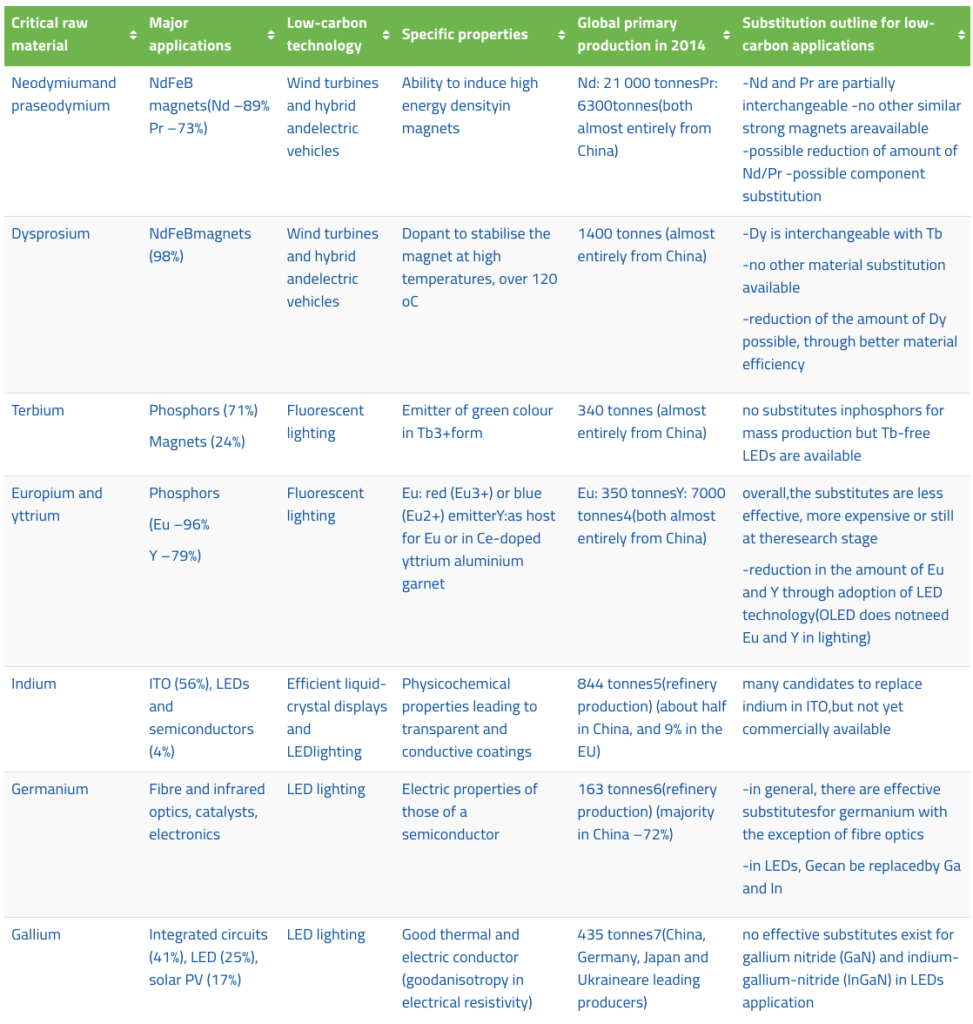 Working with your students 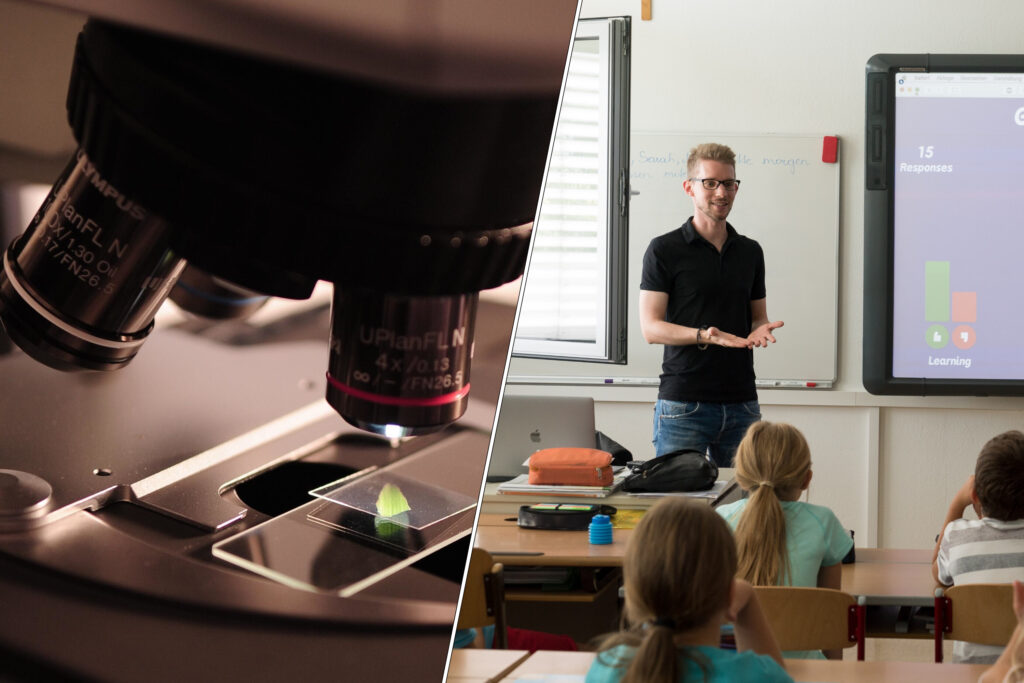 The subject of substitution can be linked to physics (energy capture and conversion), chemistry (redox reactions), technology, biology etc.

Many activities on this topic blend electronics and chemistry, so a nice transition can be made to general sciences and/or to showing the connection between matter and energy.

Silicon is very common, yet it is listed as a critical raw material for Europe. Students could discuss and investigate why this is. Discussions about sensitive regions and vulnerable resource supply chains could bring the socio-political element into the picture underscoring the need for substitution so there is less dependency on materials not easily available to European manufacturing industry.

The process of photosynthesis in plants can be linked to the production of energy with solar cells and to the necessity to develop new materials for this purpose. Plants use light-harvesting pigments to generate excitons which move electrons through an electron transport chain, which in turn drives ATP production in chloroplasts and ultimately carbon fixation. How is a solar cell like a leaf? How are they different?

Silicon is the second most abundant element on Earth (after oxygen), yet elemental silicon (silicon metal) is classified as critical. Ask students to research why this may be? (ANSWER: it is not found in its elemental form in nature and must be processed). This fits within the topic of chemistry and properties of elements and molecules. This could be also linked with how metals are processed (mining and exploration). Purification of silicon metal often uses another CRM, coking coal – the interaction and complexity of these manufacturing systems could be studied.

Let’s think about how Toolkits can be used in a learning and teaching setting.

Use the material provided here and in the Substitution Toolkits page to develop your initial lesson.

This appendix provides detailed information about specific examples of substitution. Teachers or students can look through this to find specific topics they wish to research further. All images are linked to the original documents for further information.