Several CRMs have important uses in the field of renewable energy and energy storage devices (see Figure below) Criticality arises from the scarcity of primary sources (mining) within Europe and the significant impact this will have on the EU’s ability to enact energy policies to reduce carbon emissions through new green energy technologies that help in the fight against climate change. These have been termed Energy Critical Elements (ECEs) and include a diverse group of elements currently needed and irreplaceable in the manufacturing of green energy technologies, such as wind turbines, photovoltaics, nuclear reactors, hybrid and electric vehicles and compact fluorescent lighting.

As we increase our dependency on green energy technology, we increase the demand on energy critical elements, at the current rate of production and considering the vulnerability of some supply chains, Europe needs to consider solutions before it becomes a problem.

The main applications of CRMs in the chemical and fertilisers sectors include their use in the production of catalysts, fertilisers, polymers, pharmaceutics and dyes.

Chemicals containing CRMs are produced for a broad variety of other sectors, e.g. 43% of antimony is used in the production of flame-retardant chemicals.

For borates and phosphates, the sources of secondary materials are biogenic wastes (e.g. manure or other animal by-products, bio- and food wastes, wastewater), for which recycling is considered as functional. The recycling of phosphorus rich wastes can also help prevent water eutrophication. 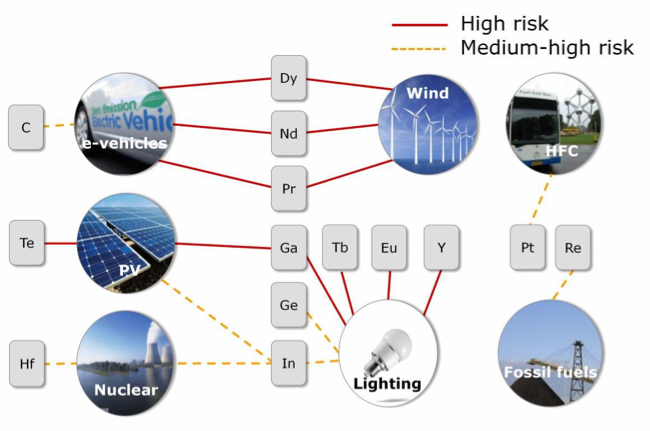 Energy critical elements used in various low-carbon energy technologies that are at risk due to potential bottlenecks in the supply chain of critical raw materials.