Up to now, commercially available photovoltaic technologies are based on inorganic materials, which require high cost and highly energy consuming preparation methods. Copper indium gallium selenide solar cells [Cu(In,Ga)Se2 – CIGS] are amongst the most promising thin film photovoltaic devices with the record efficiency of 22.6%. However, indium (In), gallium (Ga) and tellurium (Te) are critical raw materials and the In demand in intramolecular charge transfer (ICT) is huge. In addition, several materials, like cadmium (Cd), are toxic. The environmental impact of the toxic cadmium and the scarcity of indium in these compounds lead to the search for an alternative. Copper zinc tin sulphide (CZTS) may be a suitable substitute with a natural abundance in the Earth’s crust and environmentally benign elements. From a crystallographic viewpoint, CZTS is derived from the CuInS (CIS) by replacement of In atoms with Sn and Zn atoms. This produces two principal structures, known as the kesterite-type (space group 14) and stannite-type (space group 142m) structures with different arrangement of Cu and Zn atoms.

Among the two structures kesterite phase is more thermodynamically stable. Unfortunately, CZTS has not reached the same capacity as CIGS, but research is continuing, and efficiency is increasing (figure below). 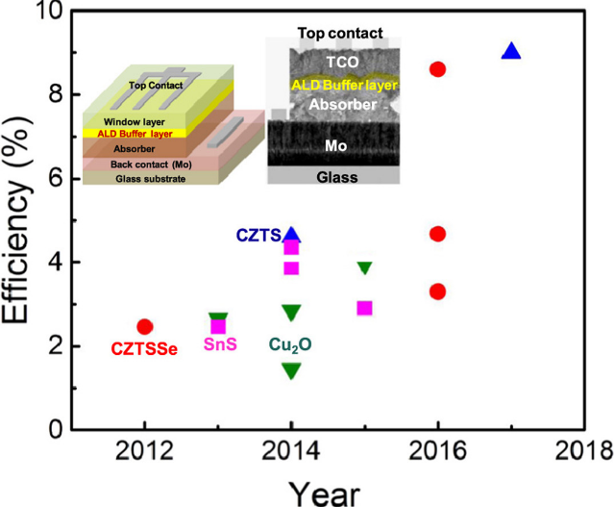 The figure shows the increase in efficiency, over the past 8 years, of different earth abundant absorber materials such as Cu2ZnSn(S,Se)4 (CZTSSe), Cu2O , SnS, and CZTS for which atomic layer deposit (ALD) is successfully used to deposit the buffer layer. 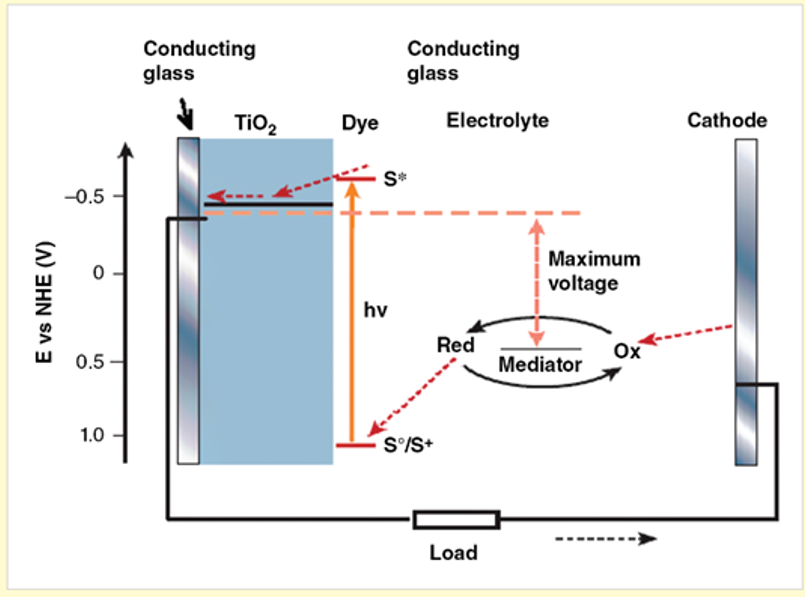 Scheme of operation of a dye-sensitised solar cell.

Scheme of operation of the dye-sensitized solar cell. The photoanode, made of a medoporous dye-sensitized semiconductor, receives electrons from the photo-excited dye which is thereby oxidized, and which in turn ixidizes the mediator, a redox species dissolved in the electrolyte. The mediator is regenerated by reduction at the cathode by the electronics circulated through the external circuit. Energy levels are measured in relation to normal hydrogen electrode (NHE). S-ground state of dye. S+ – its oxidized state, S* – its exited state.

next : Substitutions of CRM in Permanent Magnets