Permanent (hard) magnets show a significant resistance to becoming demagnetised and so, only they can be used in wind generators and electric traction motors.

Before 1940, steel magnets were in use and they were large and not strong by today’s standards. Over time, several types of permanent magnets have been discovered and developed, and at each new development stage the magnets were stronger and smaller. This reduction in size allowed for the overall reduction in the size of high-tech products like computers, mobile phones and audio-visual equipment (e.g. speakers).

Over the years the roadmap of developing magnets looked like this: Magnets were made of aluminium-nickel-cobalt (AlNiCo) and platinum-cobalt (Pt-Co) in the 1950s. These were replaced by ferrite in the 1960s, samarium-cobalt (SmCo) in the 1970s and finally the rare-earth magnet, neodymium-iron-boron (NdFeB) in the 1980s (see figure below). With these developments, magnetic energy density increased from 40 kJ∙m-3 for ferrites to over 400 kJ∙m-3 for NdFeB. Currently, rare earth magnets are the most powerful and commercially important magnets today and there has been no real advancement over these magnets in the past 30 years. 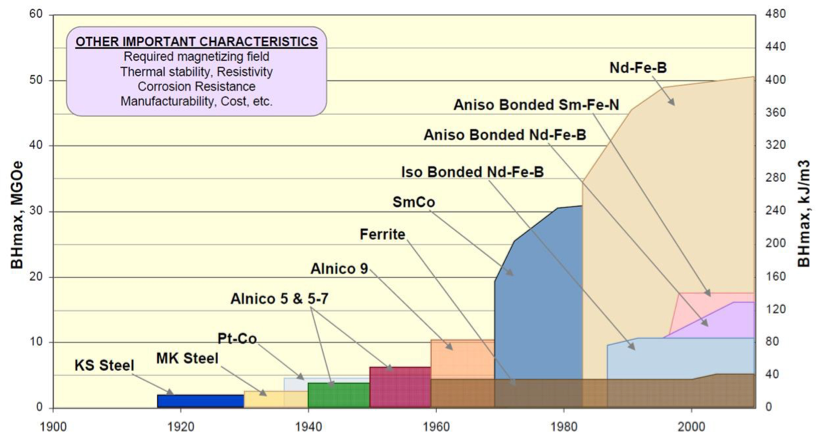 NdFeB plays an important role in applications where high performance, high efficiency and small size are required. In fact, the NdFeB magnet has the highest energy density compared to other permanent magnets, making it the material of choice in high-performance applications where the size and weight are key requirements. The properties of the NdFeB magnets derive from the unique combination of high magnetic moments of 3d transition elements (e.g. iron) with 4f electron configuration of rare earths. Based on these advantages, most of the production of Nd, Pr and Dy goes to the permanent magnets sector.

NdFeB material is the most powerful and commercially important magnet. A breakdown of the industrial applications of NdFeB is shown in the Figure below. 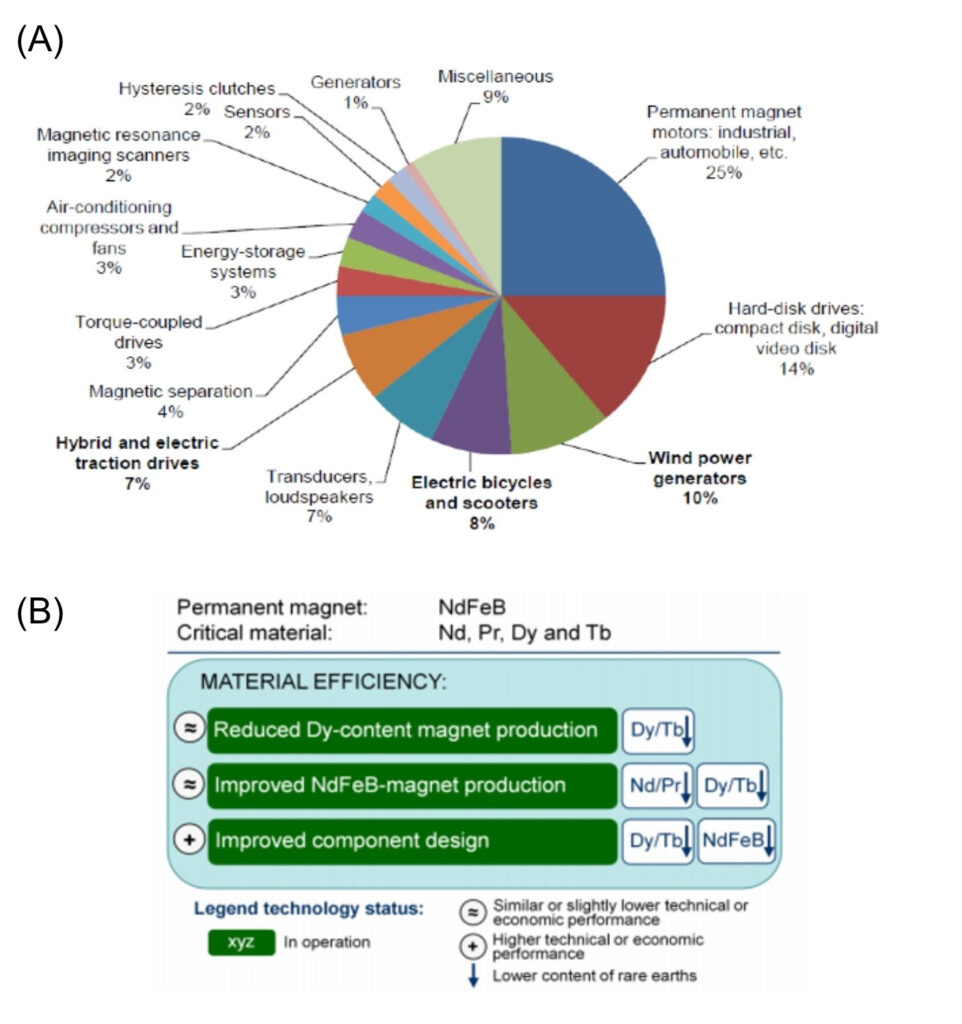 (A) Estimated industrial end use share of NdFeB magnets in 2015 (Davenport, 2015); (B) Optimisation of the efficiency of the NbFeB production, requiring less REE.

The largest market for the NdFeB magnet is the industrial and automotive industry, followed by hard-disk drives in electronic components and computers.

The addition of REE can enhance the resistance of the NdFeB magnet to becoming demagnetised, making it more stable at higher temperatures. Current market analysis indicates that the quantity of REE (i.e. neodymium and praseodymium) needed to produce NdFeB might decrease in the future.

next : Substitution of CRM in Photovoltaics