The geology of planet Earth will be covered in this Appendix with the aim of providing an overview of geological systems which give rise to natural resources.

The following sections concentrate on the fundamentals of Earth science introducing basic concepts to provide context to the source of raw materials in the Earth’s crust and the environmental issues affecting our society. This is a useful chapter for teachers who are new to the geological processes as well as a resource for students.

Structure of the Earth

Our planet is not static but a dynamic environment where geological materials are in constant flux and continually being consumed and renewed at the interface between the Earth’s crust, the world’s oceans and the atmosphere. The Earth’s interior provides much of the heat energy that drives the recycling of crust and the creation of igneous, metamorphic and sedimentary rocks. The interior of the planet is broadly divided into four regions: the inner and outer core, mantle, and crust.

It is the interaction of the Fe-Ni core and the moving outer core of liquid metal that gives rise to the Earth’s magnetic field. This field shields the planet from the harmful effects of cosmic and solar radiation! 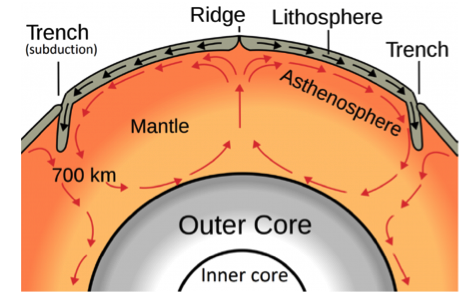 The crust is much like the skin of an apple, upon which all biological ecosystems have developed and evolved.

Radioactive decay within the interior of the planet is responsible for much of the heat radiated from our planet. Within the mantle, this results in the creation of very large regions of convection, where hot ductile mantle material slowly migrates in such a way that the overlying outer crust drifts. The drift in continental and oceanic crust is referred to as plate tectonics and is responsible for the current position of continents and past migration of continental plates into super continents (i.e. Pangea, Gondwana). The interactions of oceanic and continental crust through time and at different regions of the globe can explain the apparent recycling of crust through time to maintain the steady-state composition of the Earth.

This can result in the generation of magma and subsequent volcanic eruptions. Collision of plates can also result in the obduction of crustal material and the building of large mountain ranges (e.g. the collision of the Indian plate with the Asian plate resulting in the Himalayan Range). In each of these environments, characteristic types of environments form rock types in the ancient rock record.

Minerals differ from rocks in that they are a naturally occurring, homogeneous solid with an ordered internal crystalline structure which results in characteristic morphological properties.

Individual minerals have a consistent mineral formula but can vary in chemical composition due to substitution of elements with similar atomic radius and charge. In rocks mineral grains are commonly visible with the naked eye or with the aid of a hand lens. They vary in size and can range from large centimetre sized crystals to small sub-millimetric grains visible only under a microscope. They often appear as shiny reflective surfaces, which is due to the reflection of light from mineral cleavage planes and can be a diagnostic feature for the identification of some minerals.

Minerals are not Rocks! But they are the basic building blocks of all rocks; therefore, the identification of minerals is important for the characterisation of rocks.

Quite commonly, where visible, these minerals can have other diagnostic characteristics that make them easily recognisable to even inexperienced students. The more common diagnostic features are colour, hardness, lustre, crystal habit or shape, and cleavage. Characterisation of several of these attributes in a single mineral grain is usually enough to result in the positive identification of a mineral. In addition to the type of mineral present in a rock, other conditions to be recorded include:

Since most of the major rock-forming minerals can be found in a wide range of environments, further description of their setting within the rock sample can tell much about how they came to be formed.

Rocks are naturally occurring solid materials comprising an aggregate of one or more minerals and form part of the Earth’s crust. They are characterized by the assemblage of minerals contained within, relationships between the individual minerals and the surrounding groundmass or matrix. Rocks can be composed entirely of one or different types of mineral grains, or various fragments of different rocks and/or fossilized biological material. Due to differences in rock forming environment and mineral composition, rocks exhibit different diagnostic properties, these include color, hardness, and grain size.

Erosion and sedimentary deposition are the most active processes that can be observed at the Earth’s surface. We can infer from many of the processes we see today in continental and marine environments that these were once active in the distant past resulting in the sedimentary features, which we see preserved in the rock record over a range of four billion years. Sedimentary rocks can be divided into three types:

Each type of rock has very different origins, but all require a medium of water for their growth and accumulation.

Siliciclastic rocks are the most abundant sedimentary rocks on the surface of the planet and consist of mechanically broken-down materials from older silicate-rich crustal rocks. The erosion of rocks in areas of higher elevation through mechanical and chemical dissolution processes allows for the transport of loose sedimentary material with a wide range of clast sizes.

A clast is a chunk of rock broken off from other rocks by physical weathering.

Transport can occur by water and wind, with materials deposited at another location, in a river channel, along floodplains, in lakes or oceans. Depending on the environment, e.g. rapid moving streams to slow meandering rivers, differing size fractions of sedimentary material will be transported. In decreasing order of clast/grain size and energy of environment, these are boulder, cobble, pebble, sandstone, siltstone and mudstone. 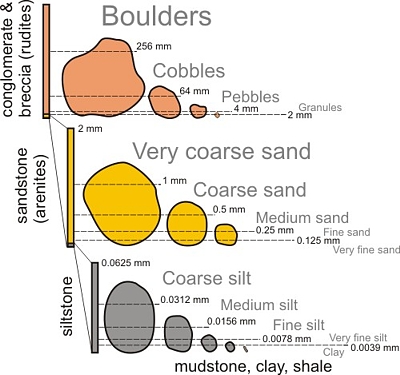 As streams and rivers travel from higher elevations towards the world’s oceans, energy gradually decreases so that we find coarser rocks and pebbles in higher energy environments near mountainous terranes and only the finer sandstone, siltstone and mudstone in the marine environment. 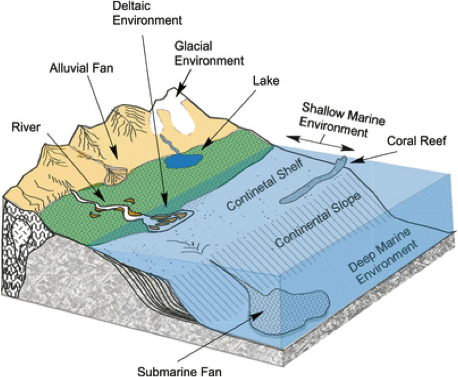 Through time these loose unconsolidated sediments may become buried and compacted resulting in a process known as diagenesis where the expulsion of water and the precipitation of cements solidifies the sediment into a sedimentary rock. This is known as lithification.

Chemical sedimentary rocks are formed from the precipitation of minerals in a range of water dominated environments including open oceans, shallow marine shelf environments as well as inland seas. Natural waters may become enriched in dissolved minerals the most common of which are carbonates and salts. Solutions may become oversaturated due to a change in conditions (temperature, pH, salinity) which leads to precipitation of minerals. In tropical environments, the warming of ocean water can perturb the carbonate equilibrium (H2CO3-HCO3–CO2) and result in the precipitation of carbonate muds, a precursor to limestones. 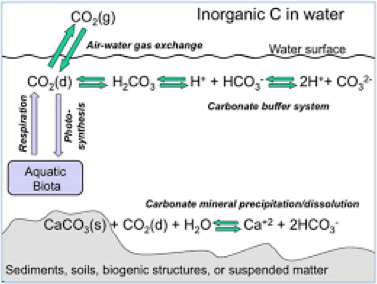 Much of the world’s limestone has been precipitated through changes in the carbonate equilibrium in warm ocean water.

Rock salt (NaCl) and sylvite (KCl) are deposited through the evaporation and supersaturation of salts in restricted inland seas. These processes are ongoing in the Dead Sea and Great Salt Lake and occurred in the past as evidenced by large deposits preserved in the rock record. These deposits can have significant economic importance.

Biochemical sedimentary rocks are largely fossiliferous and formed from living organisms in aqueous environments ranging from marine to freshwater lakes. Fossils are remains of organisms or their traces that are preserved in sedimentary rocks. Solid skeletons and shelly materials are commonly preserved as well as traces of their activity, such as tracks and trails. Rocks can form as a result of the living organism absorbing nutrients from waters and secreting mineral exoskeletons as a host in the case of coral reefs, as well as forming aggregates of detritus comprising mineral skeletons. Fossils may also be found in other types of sedimentary rock. 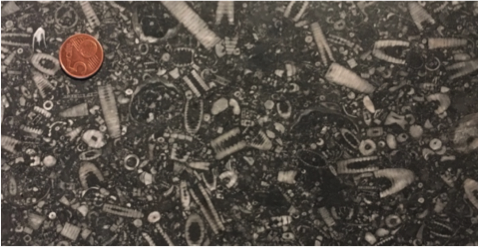 Igneous rocks have their origins in the mantle of the Earth with the making of magma from the melting of mantle material. Magmas will rise through the mantle and interact with the overlying continental and oceanic crust, resulting in further melting and assimilation of crustal material. Magmas may stall and slowly cool and crystallise beneath the Earth’s surface to form intrusive plutonic rocks or continue to surface, where they may erupt as extrusive volcanic lavas. The slow cooling of magma at depth allows for the gradual growth of crystals through time and typically results in coarse-grained equigranular textures commonly seen in examples of granite. In addition, magmas that erupt cool much more quickly and result in fine-grained textures, and in some instances form glass. Mineral grains are sometimes found surrounded by a fine-grained matrix, which is termed porphyritic.

Both extrusive volcanic and intrusive plutonic rocks are characterised by their chemical composition which is broadly correlative with their colour. Mafic (basic) rocks are dark in colour, enriched in Fe and Mn, and tend to be silica poor. Basalts are the most common of these mafic volcanic rocks and are typified by low viscosity Hawaiian type lava flows; the intrusive form of basalt is gabbro. Felsic rocks are lighter in colour, depleted in Fe and Mn and enriched in silica. Rhyolites are the most common of these felsic volcanic rocks and eruptions are considerably more explosive than their Hawaiian counterparts; the intrusive-plutonic equivalent of a rhyolite is granite. The higher silica content of these magmas results in a greater viscosity, which can plug volcanic systems leading to highly explosive eruptions, where most of the magmatic material is ejected as ash.

Metamorphic rocks are formed from the transformation (metamorphosis) of any type of rock (sedimentary, igneous or metamorphic) under heat and pressure that results in physical changes (morphology) to the rock.

During metamorphism increases in temperature and pressure cause minerals in a rock to re-equilibrate and react with the surrounding groundmass/matrix. The chemical composition of the rock remains the same, but the mineralogy may change to reflect the new conditions. This commonly results in the growth of coarse-grained minerals such as garnet, andalusite and staurolite from chemical components locally occurring in the rock. Where stress has been applied to the rock, cleavage planes may develop to form a schist, or gneissic textures may form under higher grade conditions where minerals begin to melt and segregate.

At very high grades of temperature a rock may begin to undergo melting and can give rise to the generation of granites. In addition to the classic P-T metamorphism, rocks around igneous intrusions may also be altered due to the radiation of heat from the igneous body into the surrounding country rock. Similarly, this results in the re-equilibration of minerals in the rock and growth of new minerals in response to the increased temperature. A simplistic example would be the metamorphism of limestone in the metamorphic aureole of a granite to produce marble.

Aureole is a halo next to an igneous intrusion. As deep magma bodies cool and turn into coarse-grained, plutonic rocks like granite and gabbro, they ‘bake’ a zone, or aureole, of contact metamorphism in the country rock.