A vast majority of the world’s known mineral deposits, past mines and active mining operations occur within a few 100 metres of the Earth’s surface.

Historically, these would have been the most easily found resources with discoveries evolving to greater depths over time as prospecting and exploration tools evolved. With many of the near surface resources already found or depleted, mineral exploration is now searching at greater depths for new resources. It is thought that most of the world’s vast mineral endowment could be found at greater depths within the Earth’s crust.

There are logistical problems to exploring at these depths as drilling becomes prohibitively expensive. Geophysical techniques, such as electromagnetic and seismic surveys can provide some information on the bedrock geology at depth, but it is no substitute for the examination of geological materials. Consideration must also be given to the conditions and safety of any mining activities at these depths, given temperatures can rise to life threatening levels (for example to 66oC in the Mponeng Mine, South Africa) due to the geothermal gradient of the Earth’s crust.

A mineral deposit discovery is typically a lengthy and costly process involving prospectors, exploration geologists, geophysicists over a period of several years. Identification of a geochemical/metal anomaly at surface by a prospector or geologist may prompt further sample collecting in an attempt to assess the extent of an anomaly. This may be followed up with detailed geological mapping of the prospective area by a team of geologists. A geological map with known occurrences of mineralisation may show a trend to mineralisation that follows particular rock types or other geological structures such as faults or folds. Such a map is only a 2-D representation of the geology. Geologists can project and model the geology at depth, but in order to gain information at depth in the 3rd dimension, drilling is needed. Exploration drill holes are different from drill rigs used for water and oil wells. Exploration drilling is tasked with retrieving a solid cylindrical core of rock from the drill hole. 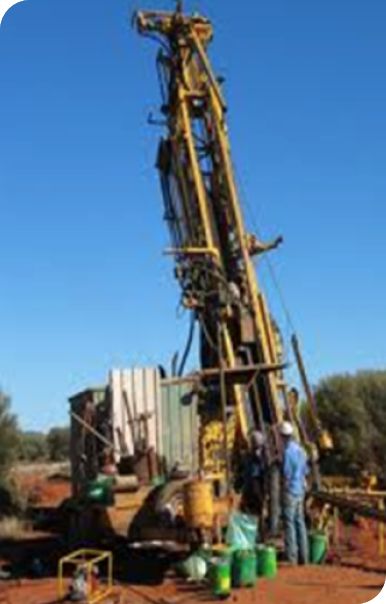 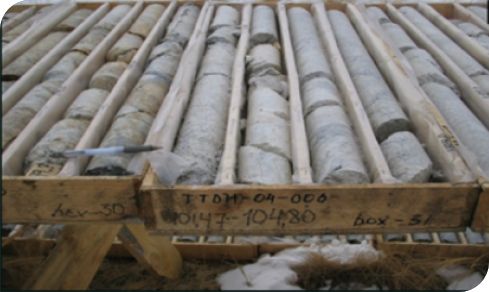 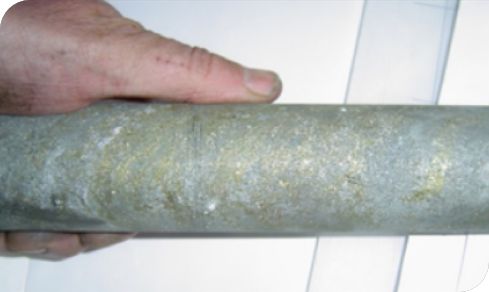 Exploration drilling (A) produces drill core (B) that can be analysed for indication of mineral deposits (C).
Source: https://en.wikipedia.org/wiki/File:Layne_Rig57.jpg

AngloGold Ashanti’s Mponeng gold mine, located south-west of Johannesburg in South Africa, is currently the deepest mine in the world. By the end of 2018, the operating depth at Mponeng mine ranged from between 3.16km to 3.84km below the surface!

Drill holes can reach up to several kilometres deep providing a continuous sample of the bedrock from surface to a target depth set by the geologist and based on the geological map at surface. Typically, an exploration project may drill between 5 and 10 holes on prospective ground for a proper assessment of the anomaly/occurrence. At this stage, should results of the drilling be unsuccessful the project would likely be terminated. Favourable results and intersection of mineralisation may warrant additional rounds of drilling to further assess the extent of mineralisation.

Following this discovery phase, significant mineral discoveries would require an additional 5 to 10 years of drilling to delineate the boundaries of a mineral deposit at depth. Even then, a project may be terminated due to low commodity prices (uneconomic conditions) or the size-tonnage of a resource being insufficient to extract economically. Less than 1% of all global mineral deposit discoveries advance past the resource delineation phase to an actual mining operation. Most mineral deposit discoveries remain unexploited but may one day become economic as commodity prices increase with time.

From discovery to actively mining can take 20 years of preparation!

Once delineation drilling is complete and the mineral resource is determined to be large enough and economically viable, baseline surveys, environmental impact assessments, implementation studies and public consultation will commence. These consultations can take a further 5 years, as governments now require plans detailing implementation of a mining plan, as well as plans for decommissioning and reclamation of the site after a mine’s closure. Overall, the process from initial discovery to final commissioning of a mine site will take on average 20 years with a success rate of less than 1%. This has serious consequences when considering the criticality of materials necessary for modern technologies.