The initial design of a mine has to take into account the geometry and depth of an ore deposit as this will determine whether extraction will be carried out by open cast (pit) or underground (shaft or portal) operations.

The metal concentration or content of an ore is assessed through geochemical analyses to determine the grade. High grade is valuable ore rich in the metals of interest, low grade have lower contents and may or may not be economic. The rocks hosting the ore body may be barren of metals or can contain small uneconomic quantitities of metals (waste rock). Mining is tasked with safely removing as much of the high-grade ore delineated in a deposit and managing or limiting the extraction of low-grade ore and waste rock. The mining process can sometimes leave behind significant amounts of mineralisation that are not economic to extract and process.

Ore quality. Ore is defined as a natural aggregation of one or more minerals that can be extracted at a reasonable profit.

There are three key components to any mining operation: - the mine - milling and metallurgy - waste management These three components form a production stream, where if any one of these were to stop functioning, a mine would need to cease operations.

For an underground mining scenario portals, adits (tunnels) and shafts are situated next to the mineral deposit in barren rock with no economic value. With this method the mineralisation can be extracted safely at different depths with little affect on access to the mining levels. For larger mines with projected lifespans of 10 years or more these tunnels can be quite elaborate and include vast underground workings. For smaller deposits the mining plan may be much simpler. The initial engineering of any mine is a critical point in the overall life of any mine, as these decisions often determine how efficiently a mine will operate for the following 10, 20 or even 50 years.

Mineral commodities of interest are extracted from the mine through a process of controlled precision blasting with explosives. These are remote detonations at a set time each day, once the mine has been vacated for the daily blast. The target areas are selected upon inspection by mining geologists and in consultation with engineers. These areas form resource blocks that cannot be removed randomly from a mine, they must be extracted in sequence in different regions to maintain the overall structural stability of an underground operation. Once material has been blasted, the site is inspected by engineers and then miners can recover the blasted material with the use of large trucks (this is called mucking). This material can be transported underground to a central shaft to be hoisted to surface or transported by truck to a surface stockpile for further processing.

The mucking process is becoming more remotely controlled and robotic for the safety of the miner. Kiruna Mine, Sweden is fully robotic… 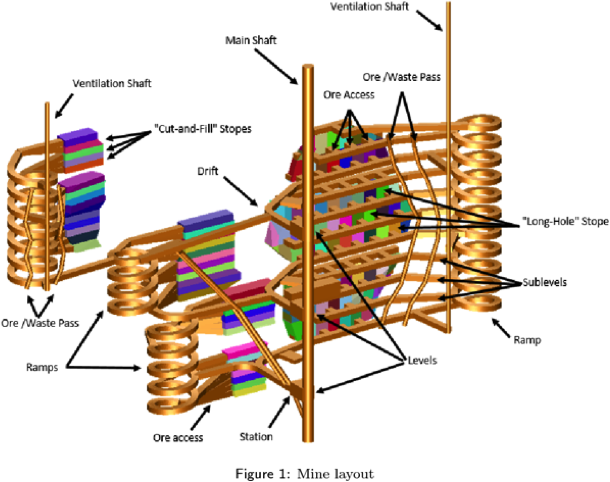 For open pit operations, the aspect ratio or slope of the pit can significantly affect the cost of mining as wide gently sloping pit walls will likely result in a high stripping ratio and in the excavation of millions of tonnes of excess waste rock (Figure below). The deeper the resource is in the crust, the wider a pit’s diameter must be for safety purposes; the world’s largest open pit mines do not typically exceed 1 km depth, and have diameters of 1-2 km.

For an open pit mine, extraction is much more simple with material collected and transported out of the pit after each blast. Open pits feature characteristic benches on the slopes to add stability to the mine and limit the damage of falling debris from the pit walls.

Depending on the resource being mined, open pits may transition to an underground operation through a glory hole at the bottom of the pit. Open pit mining is a cost effective way of recovering resources quickly in the early stages of mining. This can be important for a mining company struggling to cover the costs of the comissioning of a mine and mill. 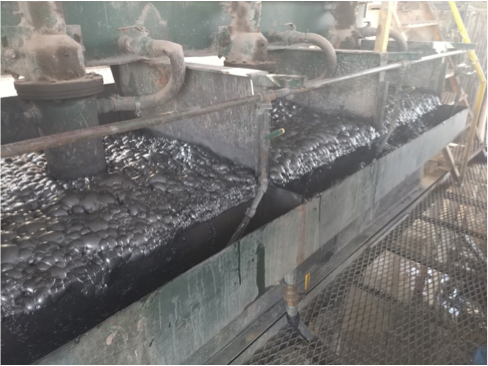 Circuits can be adjusted to specific metals such that different concentrates of copper, lead and zinc can be produced. These concentrates consist of a fine grained fraction of a metal sulfide mineral with few impurities. If a zinc concentrate was chemically analysed, it would exhibit very high zinc contents, but may also exhibit anomalous contents of indium (In), gallium (Ga), germanium (Ge), tellurium (Te), selenium (Se) and cadmium (Cd) among others. This is related to the composition of the ore minerals from the mineral deposit, which can include these elements in the mineral structure.

Flotation is not always used as a method for concentration of metals from bulk ore feed. Gold mining operations commonly employ a process of cyanide leach, where milled material is stockpiled at surface on PVC plastic lined pads and is chemically treated with leaching reagents. Cyanide solutions (CN) are percollated through the stockpile, leaching gold, silver and other metals. This solution is collected, treated and the gold recovered. The CN solution is recycled and used again in the heap leach pad. The gold recovered can be melted into bars on the mine site, with further refining necessary. Gold and copper are commonly accompanied by tellurium (Te) in deposits, but this is not actively recovered and is left behind in the leach pad. Current research is looking into ways to recover Te from the leach pads of gold and copper mining operations. 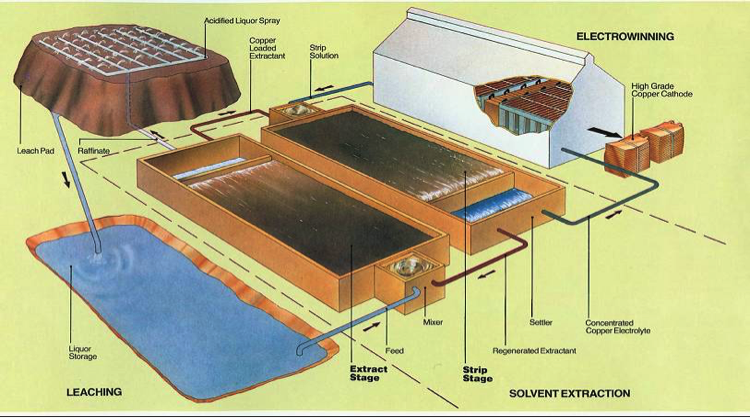 The remaining waste materials, also known as tailings consist of uneconomic minerals and some residual ore minerals not recovered by flotation. Due to the reactivity of sulfides in the presence of oxygen, tailings are commony stored under water in large dammed tailings impoundments to contain the slurry, these are referred to as tailing ponds. An elevated water table is maintained to limit oxygenation of the tailings and subsequent oxidation, which results in the  production of sulfuric acid and mobility of heavy metals. These tailings require management for the forseeable future to monitor dams and treat wastewater discharge. Upon closure of a mine, most of the environmental liability rests with the tailings impoundment, which pose the most risk to the local environment.

Older tailings are now the focus of renewed interest in metal recovery due to residual contents of ore minerals and CRMs contained within the waste material, which would not have been recognised by mining companies over the last 100 years (see SULTAN-Project: European Training Network for the Remediation and Reprocessing of Sulfidic Mining Waste Sites).

SULTAN Feedstocks focus on the tailings generated by the mineral processing of Cu-Zn ores, Zn-Pb ores and mixed Cu-Zn-Pb ores. The resulting tailings may contain valuable metals, ranging from base, precious to critical metals such as In, Ge and Ga. They also represent the largest volumes of tailings in Europe, and are widely available in countries such as Sweden, Poland, Bulgaria, Portugal, Spain, Belgium and Ireland. 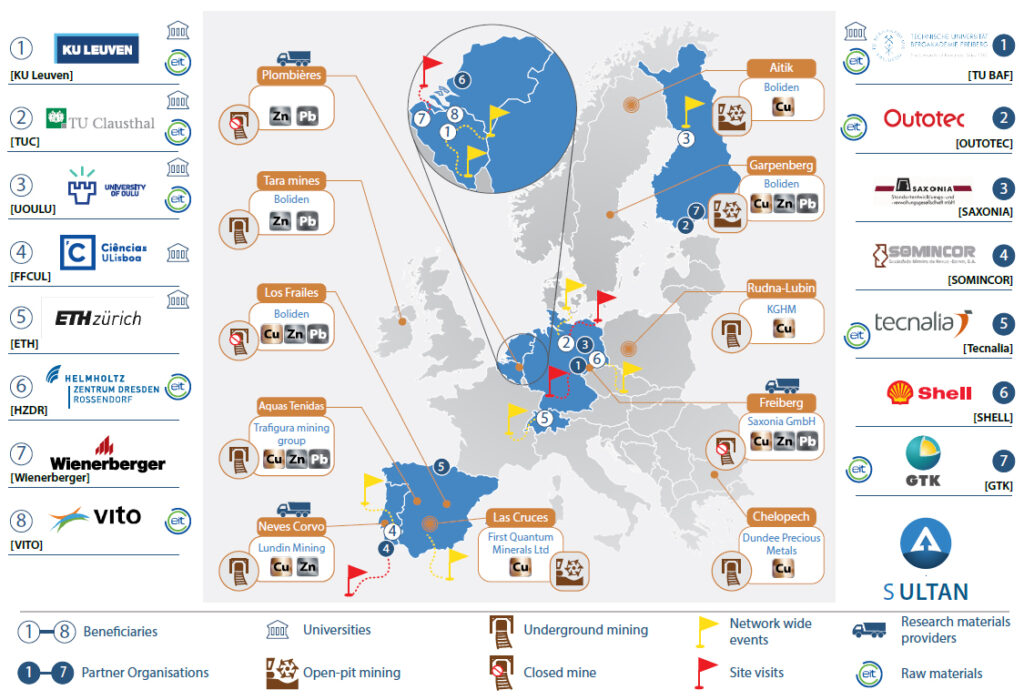 The SULTAN consortium: 8 Beneficiaries and 7 Partner Organisations. Network-Wide Events (8), TSF & site visits (5) and access to research materials (tailings) (3) are shown, along with the EU-wide character of SULTAN and the link with EIT RawMaterials. The infographic highlights 10 key operational and closed mines in Europe that produce(d) Cu, Zn and/or Pb. The Freiberg Mining District and the Plombières mines are also shown as these historical mining regions provides two of the three main research materials in SULTAN.

Metallurgical concentrates produced from mining operations need a final refining stage to produce pure metals. It is worth noting, concentrates produced consist of metal sulphide minerals, which are undesireable from a manufacturing perspective. Technology producers and manufacturers are reliant on the mining industry for a steady supply of pure refined metals. Unlike their parent sulfide minerals, metals are maleable, fusible, good conductors of electricity and non-reactive. These differences arise from the chemical state of a metal in a sulphide complex versus its pure metal form. For example, the mineral sphalerite is a zinc-sulphide (ZnS), where zinc is in the ionic form of Zn2+ and balanced by anionic sulphur S2-. Smelting of zinc concentrate is a high temperature reduction process where Zn2+ is converted to pure metallic zinc (Zn0) in a molten metal form with the loss of sulphur as the gas SO2.

The SO2 gas is collected to produce sulfuric acid, a common reactant used in the production of fertiliser and used in other chemical processes. Elements such as In, Ga, Ge, Te, Se and Cd among others can be electrolytically recovered at this stage to ensure the final metal produced is 99.99% pure. The pure molten Zn metal can now be cast into ingots or other shapes for distribution. On the one hand, the byproduct metals recovered can add significant value to a zinc ore in the case of the Energy Critical Elements (ECEs). On the other hand, elements such as cadmium, mercury, arsenic and thallium can decrease the value of an ore, resulting in penalties or fines incurred by the mining company which supplied the ore concentrate. Most of the world’s In, Ga, Ge, Te, Se and Cd are recovered as byproducts of the smelting process. Supplying the world’s future demand for these ECEs will require better identification of these elements in ores, improved recovery at smelters and discovery of new primary source enriched in ECEs.

next : The Rock Cycle